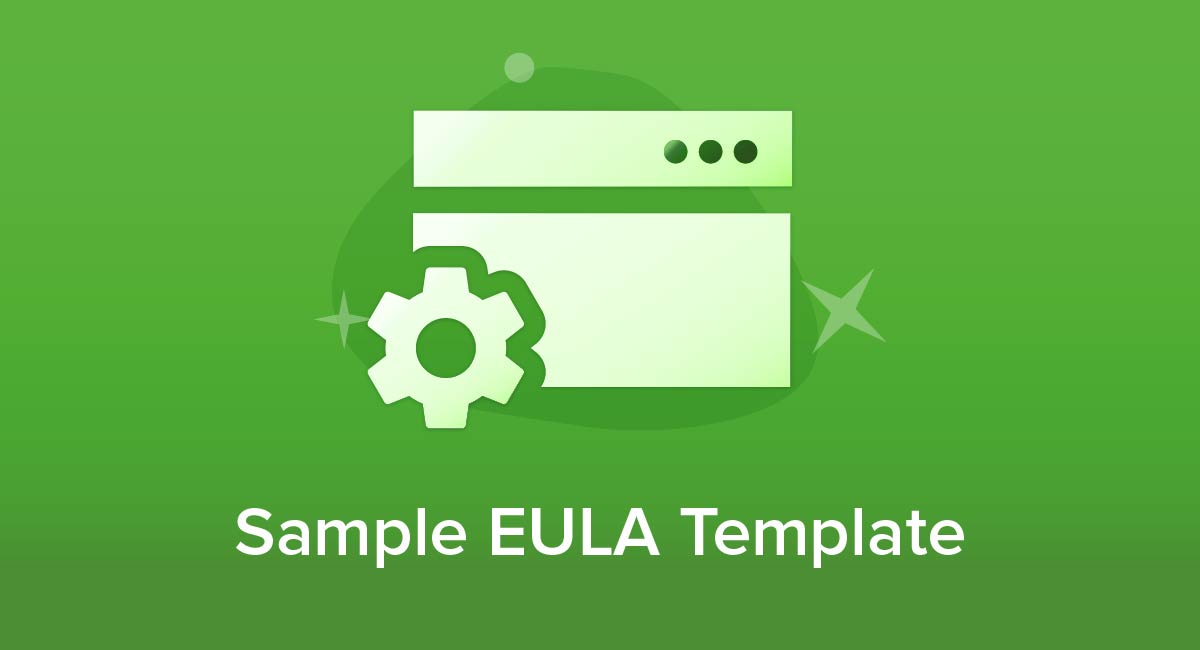 An End-User License Agreement (EULA) details the terms of using your license and lets you control the software's use.

We'll describe the benefits of having an EULA, show you what clauses and content your EULA should include and break down the best way to present your EULA to your users.

Our Free EULA Generator is built to help you create a professional drafted End-User License Agreement. Just follow these steps: 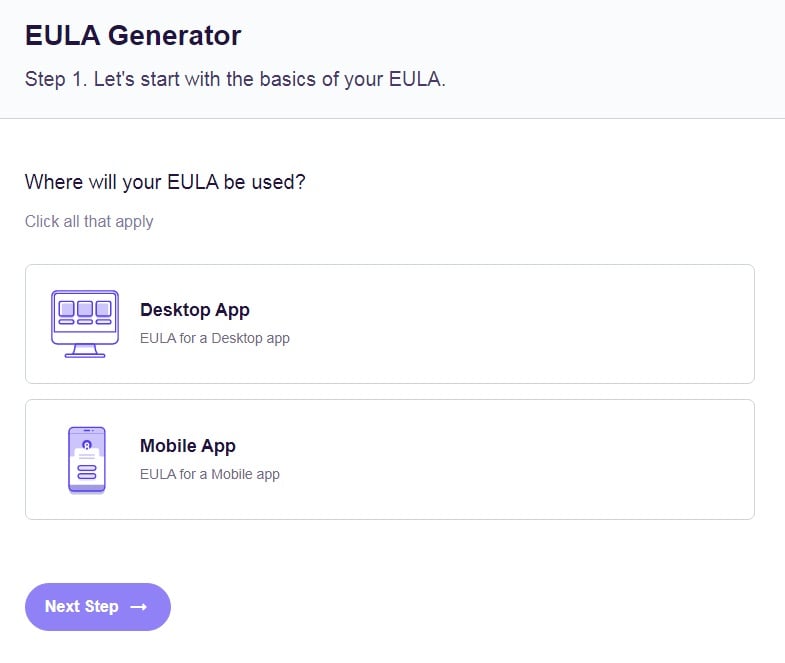 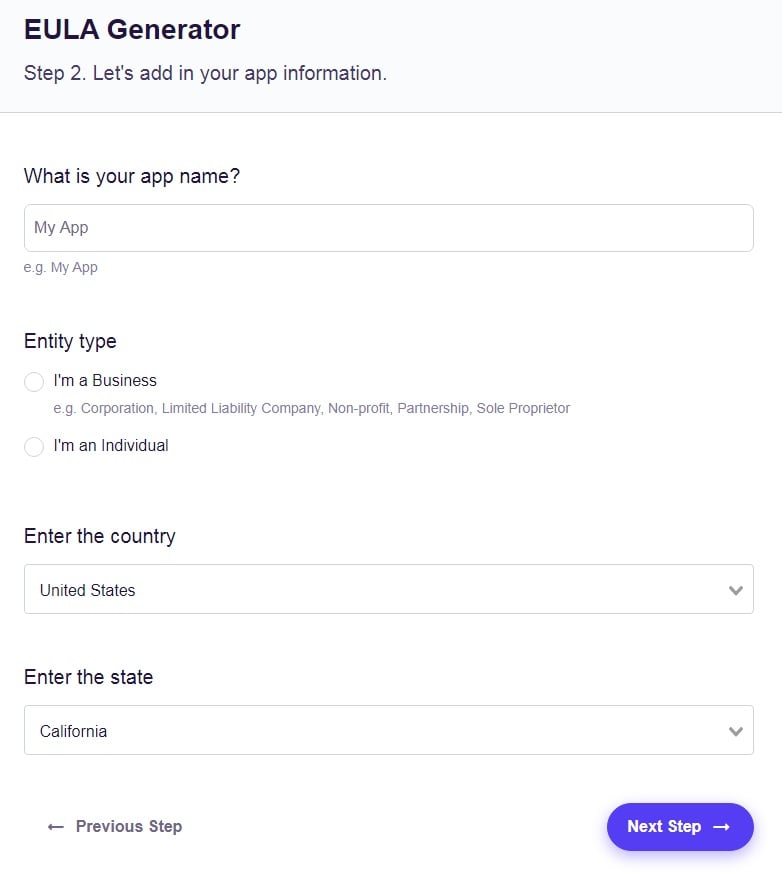 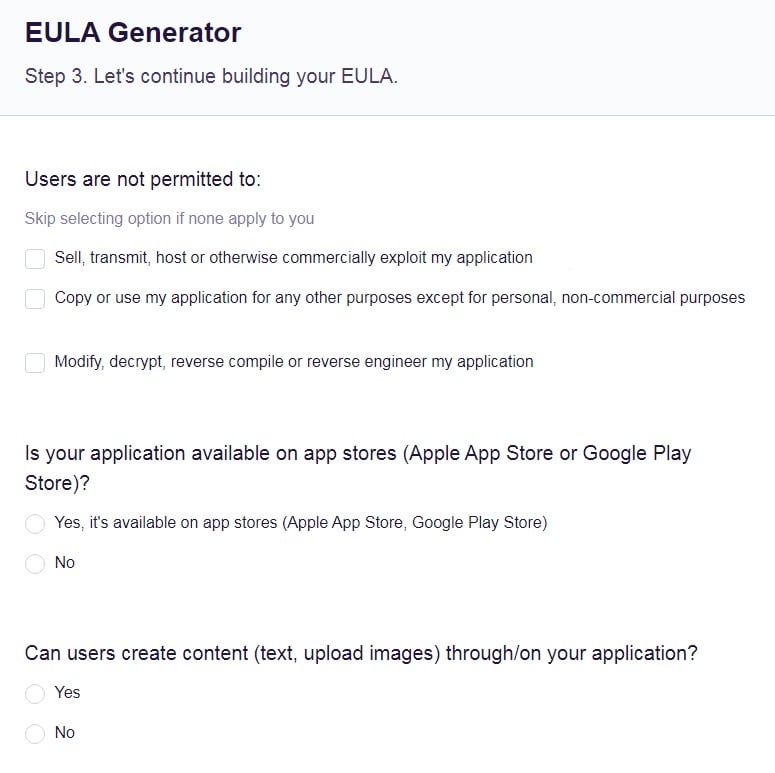 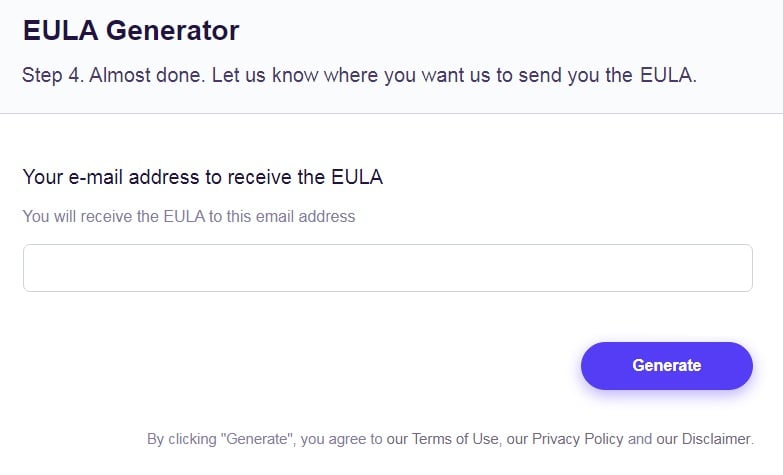 What is an End User License Agreement?

An end-user license agreement is a contract between a software developer or retailer and the person who will use the software. It's usually narrower in scope than other agreements such as a Terms and Conditions agreement.

The key difference is that the EULA normally only covers the actual use of the software and any resulting consequences. It doesn't cover wider issues such as the purchase of the software or what the developer or retailer does with any personal data gathered through the sale.

Another difference is that users often have the opportunity to review a Terms and Conditions agreement or a purchase contract before buying a product or service. Often they won't see an EULA until after making a purchase, but before installing or using the software for the first time.

The Rationale for Having an EULA

EULAs exist because software is a special case when it comes to commerce. It's not primarily about buying a physical good or a service, as software disc or downloaded file has little to no inherent value. Instead, the value lies in copyrighted material and the buyer is granted a right to use the software under defined conditions.

Technically an EULA is a license to do something (install and use the software) rather than a purchase agreement. This is the case whether the user paid a one-off fee or a subscription, or indeed if the software is provided without charge. The EULA is an opportunity for the software developer or retailer to lay down conditions for using the software.

Benefits of Having an EULA

Having an EULA brings several benefits to you as a software developer or retailer.

Most importantly, it lets you assert and protect your copyright. This is vital as without copyright, your software has little or no commercial value.

Depending on your jurisdiction, asserting copyright may be vital to avoid a default position of users being able to copy and distribute your software to others. An EULA helps make sure users are both aware of, and agree to, your copyright.

Depending on your jurisdiction, an EULA may only be valid if the user has the opportunity to review and agree to it before installing or using the software.

In some cases you may need a Return and Refund Policy that allows a user who buys software and then reads the EULA to ask for a refund rather than continue to use the software.

Key Clauses for an EULA

While any EULA must cover your specific circumstances, you'll likely need to include several key clauses to address specific, universal points.

Here are some of the clauses that every EULA should contain.

The license clause sets out how the user can use the software.

Important questions to answer in this clause include:

CCleaner explicitly says agreeing to the full EULA is necessary for the user to benefit from the license:

Take-Two Games has a clause that covers many of these points in just one sentence. Although the clause continues with additional important information related to the nature of the license:

A restrictions clause sets out specific things the user can't do with the software.

Common things to include in a restrictions clause include making it clear the user cannot reproduce, distribute or sell the software. You could also ban people from using the software to carry out illegal activity.

Other points to list will depend on the software. For example, an EULA for software to operate an electronic list could ban the user from using the software to send spam.

An EULA will often ban reverse engineering, which means accessing the source code of the software, for example to uncover or copy some of its functions. In some jurisdictions, fair use copyright principles may give people a legal right to carry out some reverse engineering. If this is the case, you may want to include a clause saying something like reverse engineering is only allowed where "expressly permitted by applicable law."

UBI goes into detail about the banned ways people could use its software: 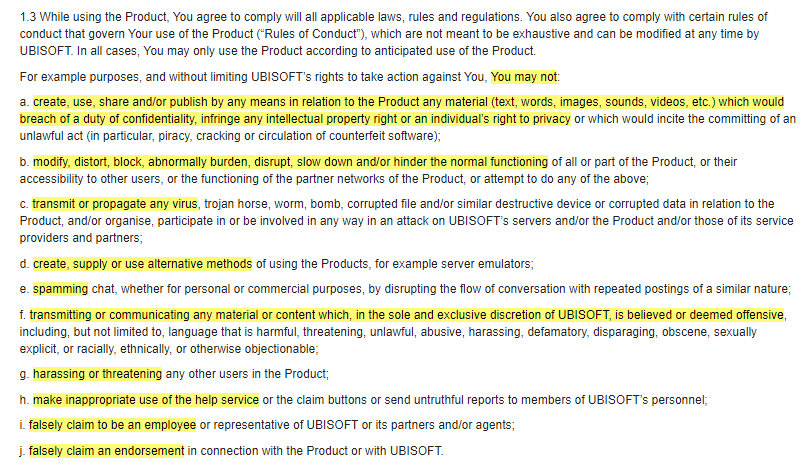 Malwarebytes addresses use of its software in a way that could harm third parties:

A lot of the language in these types of clauses tend to be somewhat standard. For example, you'll usually see restrictions on using the software unlawfully, and a ban on modifying the software.

But a lot of this clause has room for customization. For example, in the UBI image above, there's a ban on making inappropriate use of the help service. While you likely have a help service with your software, you may not for some reason. In this case, you can see how this part of the clause would be business-specific.

This clause is about disclaiming any legal responsibility for damage caused to the user and their property from using the software. You can give specific examples of liability you are disclaiming such as the following:

You should also make clear if you aren't accepting any responsibility for damages caused to somebody other than the user. For example, you may want to disclaim liability for damage caused if the user commits copyright infringement using your software.

Outfit7 details how it doesn't accept liability for content the user generates with the software:

You'll need to clarify a couple of points to increase the likelihood your disclaimer has the intended legal force.

Firstly, you should make clear if you are disclaiming all liability rather than just the specific cases you mention. Secondly, you should acknowledge that you are only limiting liability to the maximum extent allowed by the law in your jurisdiction.

This clause covers if and how you can terminate the license. You should cover the following points here:

Sophos covers the various ways the agreement could end: 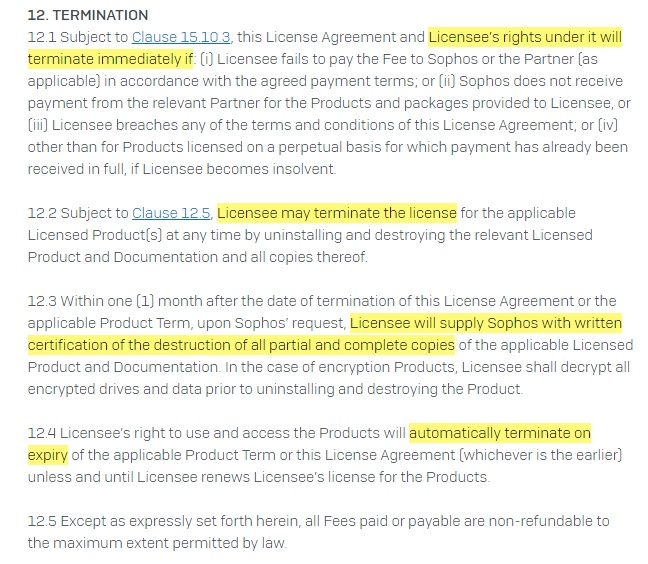 PulseSecure covers the need for users to destroy or return physical copies:

This clause makes clear that you aren't providing any warranty for the software. Note that you can't normally disclaim fundamental failings such as the software simply not working or not matching the description you have when you sold it.

Instead, a warranty disclaimer clause is normally about making clear that you aren't guaranteeing the software will meet the user's needs or be suitable for a particular task.

PaperCut directly addresses the user in making its warranty disclaimer:

SolarWinds doesn't have a warranty disclaimer but rather a clearly limited warranty:

Updates and Upgrades to the Software

Not every EULA needs this clause. It can cover topics such as the following:

Unreal Engine explains that the license will cover future updates if they happen:

Corel addresses the issue of consent for updates in its clause:

Cisco covers all of these points in a single table:

The Learning Corp covers the key points as part of a "Miscellaneous" clause, but they would be more effective as a standalone section that was broken down to be easier to read:

Remember: While these are the main clauses that should be included in your EULA, most of them have room for customization in content depending on your actual business practices. Your EULA is your place to dictate the terms of your license, so take advantage of this opportunity to really set forth what you want.

Displaying and Getting Agreement to Your EULA

To reduce the risk of your EULA being ruled invalid, you should always get the user's express consent to it before they are able to use the software. The safest option is to require them to click a button or check a box during the installation process that is clearly marked as indicating they have read and consent to the EULA.

Different rulings and jurisdictions have divided over whether an EULA is valid if the user simply has an opportunity to read it before installing and using the software, or if they have actively confirmed their acceptance.

Some implementation options include the following:

Here's an example of how HP presents its EULA and gets users to consent to it at installation: 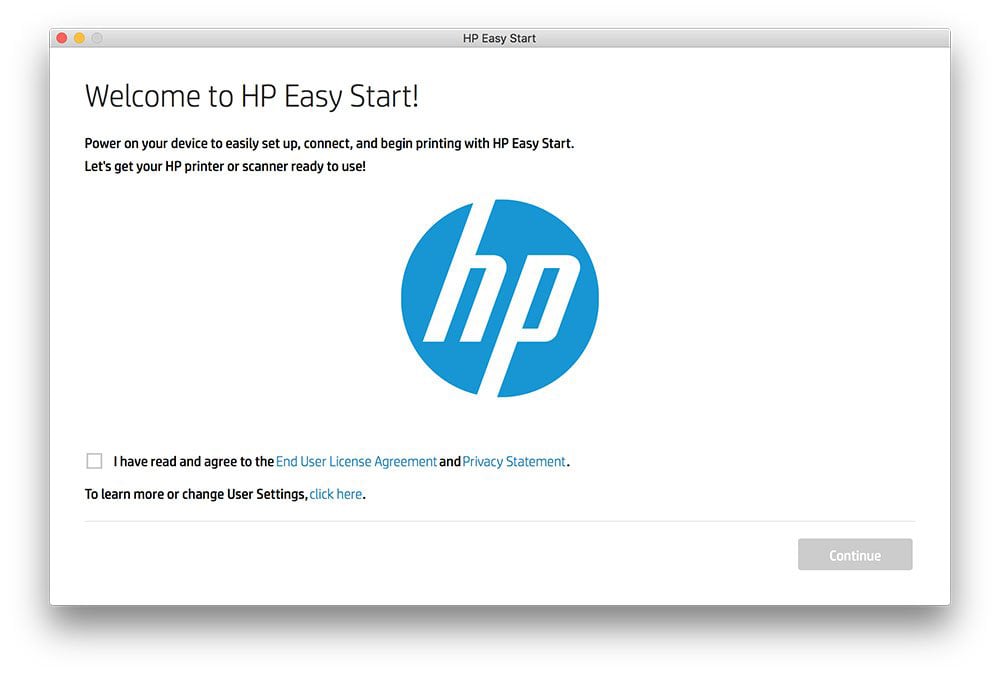 Blender embeds the full text of its EULA in its installation screen so users can easily scroll through it. It also uses a checkbox to get users to accept the terms within the EULA: 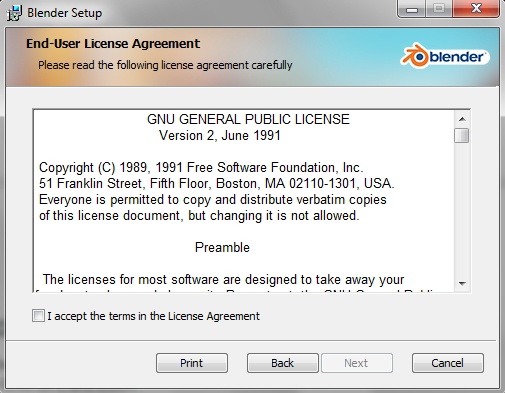 Let's recap what you need to know about End-User Licence Agreements:

This article was last updated on 07 September 2022. 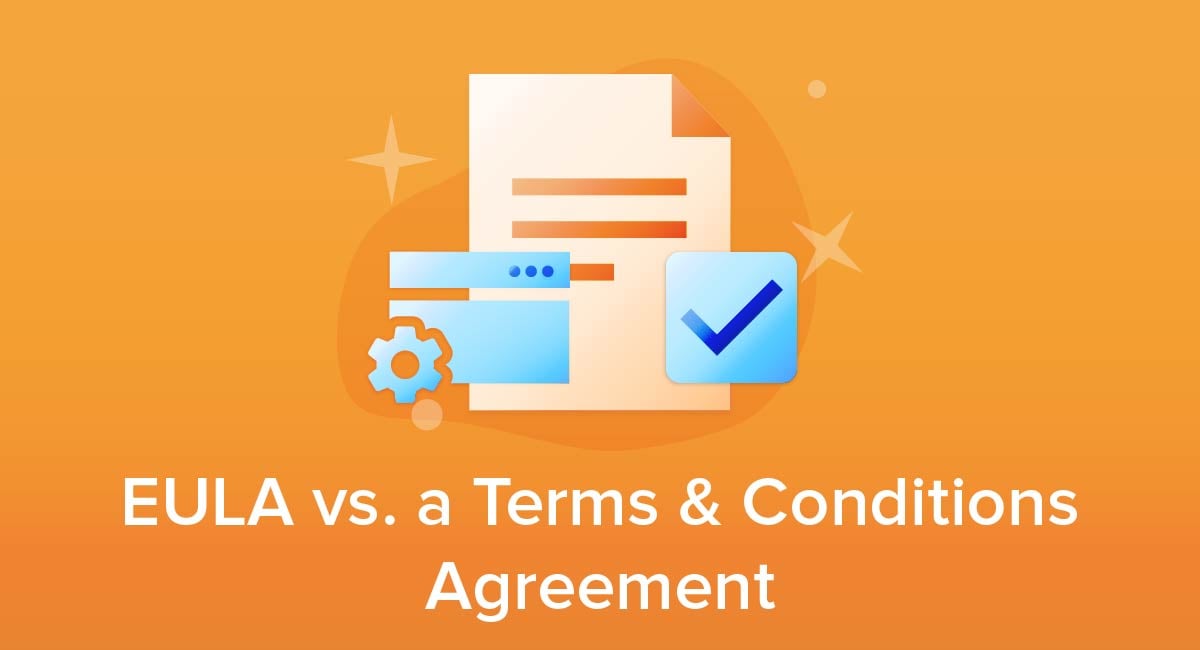 An End-User License Agreement (EULA) and a Terms and Conditions agreement (T&C) both protect your business by setting out an agreement with a customer or user. However, they have some... 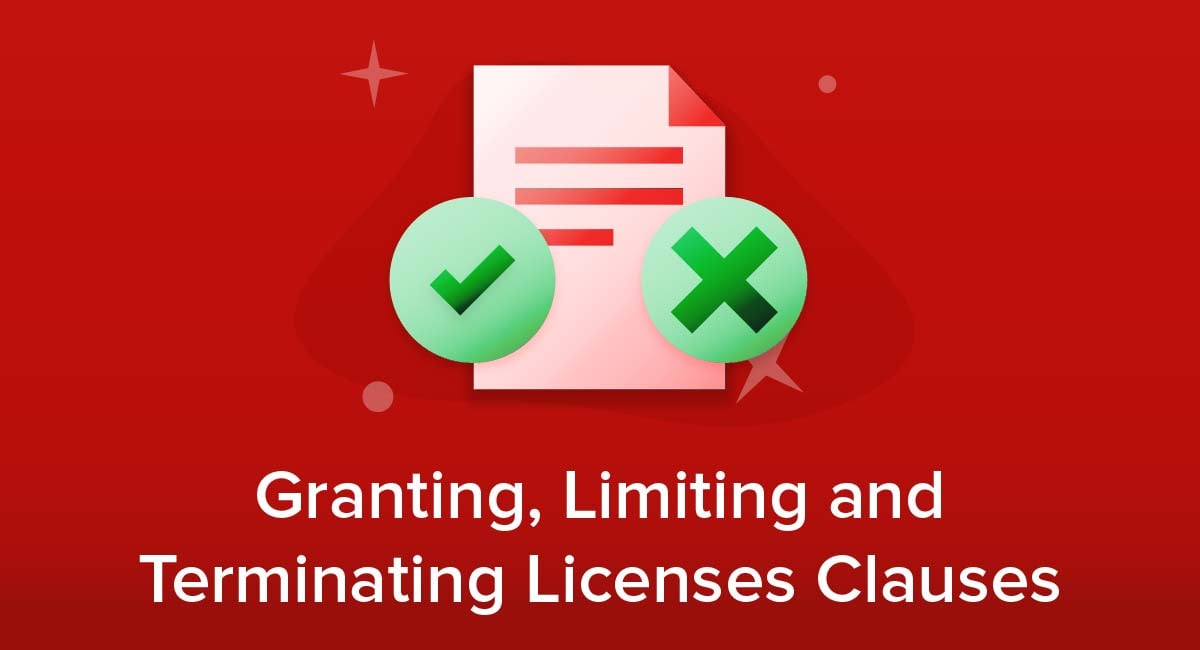 If you offer any form of software, including web tools and apps, you will usually license it rather than sell it outright. You can use your Terms agreements to set... 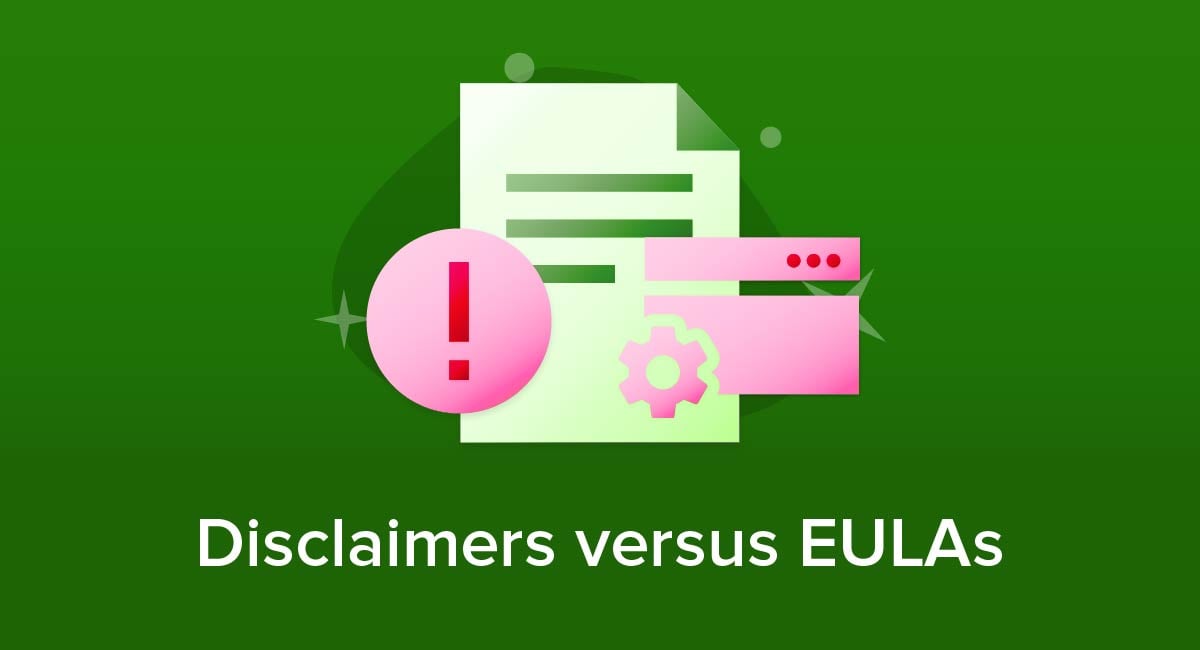 What is the difference between a disclaimer and an EULA? Should your website have one or the other or include both of them? Protecting your company or website from potential legal...